Message of the Holy Father Francis for Lent 2018 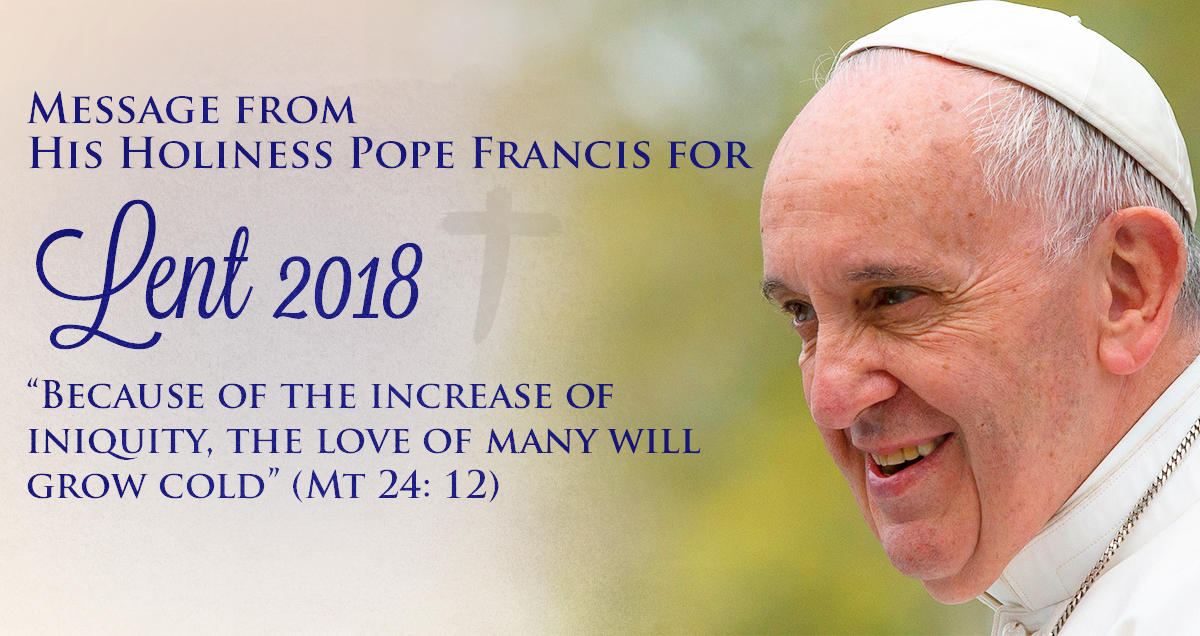 Once again, the Pasch of the Lord draws near! In our preparation for Easter, God in his providence offers us each year the season of Lent as a “sacramental sign of our conversion”.[1] Lent summons us, and enables us, to come back to the Lord wholeheartedly and in every aspect of our life.

With this message, I would like again this year to help the entire Church experience this time of grace anew, with joy and in truth. I will take my cue from the words of Jesus in the Gospel of Matthew: “Because of the increase of iniquity, the love of many will grow cold” (24:12).

These words appear in Christ’s preaching about the end of time. They were spoken in Jerusalem, on the Mount of Olives, where the Lord’s passion would begin. In reply to a question of the disciples, Jesus foretells a great tribulation and describes a situation in which the community of believers might well find itself: amid great trials, false prophets would lead people astray and the love that is the core of the Gospel would grow cold in the hearts of many.

Let us listen to the Gospel passage and try to understand the guise such false prophets can assume.

They can appear as “snake charmers”, who manipulate human emotions in order to enslave others and lead them where they would have them go. How many of God’s children are mesmerized by momentary pleasures, mistaking them for true happiness! How many men and women live entranced by the dream of wealth, which only makes them slaves to profit and petty interests! How many go through life believing that they are sufficient unto themselves, and end up entrapped by loneliness!

False prophets can also be “charlatans”, who offer easy and immediate solutions to suffering that soon prove utterly useless. How many young people are taken in by the panacea of drugs, of disposable relationships, of easy but dishonest gains! How many more are ensnared in a thoroughly “virtual” existence, in which relationships appear quick and straightforward, only to prove meaningless! These swindlers, in peddling things that have no real value, rob people of all that is most precious: dignity, freedom and the ability to love. They appeal to our vanity, our trust in appearances, but in the end they only make fools of us. Nor should we be surprised. In order to confound the human heart, the devil, who is “a liar and the father of lies” (Jn 8:44), has always presented evil as good, falsehood as truth. That is why each of us is called to peer into our heart to see if we are falling prey to the lies of these false prophets. We must learn to look closely, beneath the surface, and to recognize what leaves a good and lasting mark on our hearts, because it comes from God and is truly for our benefit.

In his description of hell, Dante Alighieri pictures the devil seated on a throne of ice,[2] in frozen and loveless isolation. We might well ask ourselves how it happens that charity can turn cold within us. What are the signs that indicate that our love is beginning to cool?

More than anything else, what destroys charity is greed for money, “the root of all evil” (1 Tim 6:10). The rejection of God and his peace soon follows; we prefer our own desolation rather than the comfort found in his word and the sacraments.[3] All this leads to violence against anyone we think is a threat to our own “certainties”: the unborn child, the elderly and infirm, the migrant, the alien among us, or our neighbour who does not live up to our expectations.

Creation itself becomes a silent witness to this cooling of charity. The earth is poisoned by refuse, discarded out of carelessness or for self-interest. The seas, themselves polluted, engulf the remains of countless shipwrecked victims of forced migration. The heavens, which in God’s plan, were created to sing his praises, are rent by engines raining down implements of death.

Love can also grow cold in our own communities. In the Apostolic Exhortation Evangelii Gaudium, I sought to describe the most evident signs of this lack of love: selfishness and spiritual sloth, sterile pessimism, the temptation to self-absorption, constant warring among ourselves, and the worldly mentality that makes us concerned only for appearances, and thus lessens our missionary zeal.[4]

What are we to do?

Perhaps we see, deep within ourselves and all about us, the signs I have just described. But the Church, our Mother and Teacher, along with the often bitter medicine of the truth, offers us in the Lenten season the soothing remedy of prayer, almsgiving and fasting.

By devoting more time to prayer, we enable our hearts to root out our secret lies and forms of self-deception,[5] and then to find the consolation God offers. He is our Father and he wants us to live life well.

Almsgiving sets us free from greed and helps us to regard our neighbour as a brother or sister. What I possess is never mine alone. How I would like almsgiving to become a genuine style of life for each of us! How I would like us, as Christians, to follow the example of the Apostles and see in the sharing of our possessions a tangible witness of the communion that is ours in the Church! For this reason, I echo Saint Paul’s exhortation to the Corinthians to take up a collection for the community of Jerusalem as something from which they themselves would benefit (cf. 2 Cor 8:10). This is all the more fitting during the Lenten season, when many groups take up collections to assist Churches and peoples in need. Yet I would also hope that, even in our daily encounters with those who beg for our assistance, we would see such requests as coming from God himself. When we give alms, we share in God’s providential care for each of his children. If through me God helps someone today, will he not tomorrow provide for my own needs? For no one is more generous than God.[6]

Fasting weakens our tendency to violence; it disarms us and becomes an important opportunity for growth. On the one hand, it allows us to experience what the destitute and the starving have to endure. On the other hand, it expresses our own spiritual hunger and thirst for life in God. Fasting wakes us up. It makes us more attentive to God and our neighbour. It revives our desire to obey God, who alone is capable of satisfying our hunger.

I would also like my invitation to extend beyond the bounds of the Catholic Church, and to reach all of you, men and women of good will, who are open to hearing God’s voice. Perhaps, like ourselves, you are disturbed by the spread of iniquity in the world, you are concerned about the chill that paralyzes hearts and actions, and you see a weakening in our sense of being members of the one human family. Join us, then, in raising our plea to God, in fasting, and in offering whatever you can to our brothers and sisters in need!

The fire of Easter

Above all, I urge the members of the Church to take up the Lenten journey with enthusiasm, sustained by almsgiving, fasting and prayer. If, at times, the flame of charity seems to die in our own hearts, know that this is never the case in the heart of God! He constantly gives us a chance to begin loving anew.

One such moment of grace will be, again this year, the “24 Hours for the Lord” initiative, which invites the entire Church community to celebrate the sacrament of Reconciliation in the context of Eucharistic adoration. In 2018, inspired by the words of Psalm 130:4, “With you is forgiveness”, this will take place from Friday, 9 March to Saturday, 10 March. In each diocese, at least one church will remain open for twenty-four consecutive hours, offering an opportunity for both Eucharistic adoration and sacramental confession.

During the Easter Vigil, we will celebrate once more the moving rite of the lighting of the Easter candle. Drawn from the “new fire”, this light will slowly overcome the darkness and illuminate the liturgical assembly. “May the light of Christ rising in glory dispel the darkness of our hearts and minds”,[7] and enable all of us to relive the experience of the disciples on the way to Emmaus. By listening to God’s word and drawing nourishment from the table of the Eucharist, may our hearts be ever more ardent in faith, hope and love.

With affection and the promise of my prayers for all of you, I send you my blessing. Please do not forget to pray for me.

Solemnity of All Saints

[1] Roman Missal, Collect for the First Sunday of Lent (Italian).

[3]“It is curious, but many times we are afraid of consolation, of being comforted. Or rather, we feel more secure in sorrow and desolation. Do you know why? Because in sorrow we feel almost as protagonists. However, in consolation the Holy Spirit is the protagonist!” (Angelus, 7 December 2014).