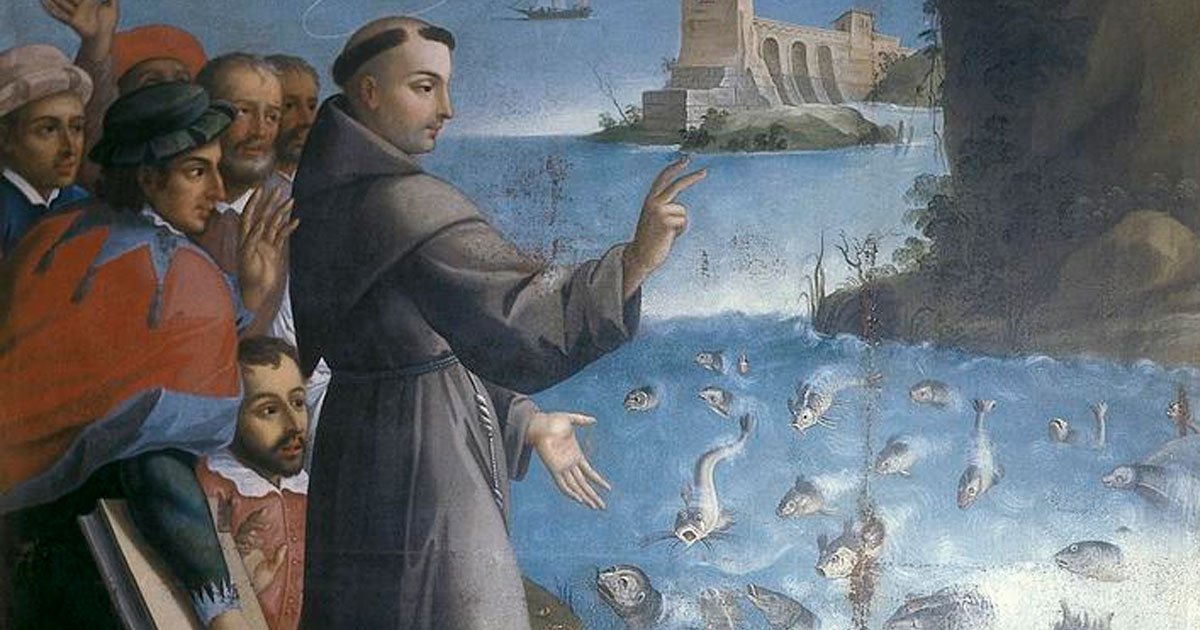 Lost something? Pray to St. Anthony

This Doctor of the Church was born in Lisbon, Portugal, and joined the Augustinians at age 15. In 1220 he entered the Franciscans to become an African missionary and was sent to Morocco. However, poor health forced his return to Europe and a storm at sea deposited him in Sicily. He traveled to Assisi, where his gift for preaching was recognized and put to use in Italy and France. St. Francis appointed him the order’s first “lector in theology”; he also was the superior of several communities. Many believers seek his intercession when something is lost.

St. Anthony Preaches to the Fishes
from "The Little Flowers of St. Francis of Assisi," 1476

St. Anthony being at one time at Rimini, where there were a great number of heretics, and wishing to lead them by the light of faith into the way of truth, preached to them for several days, and reasoned with them on the faith of Christ and on the Holy Scriptures. They not only resisted his words, but were hardened and obstinate, refusing to listen to him.

At last St. Anthony, inspired by God, went down to the sea-shore, where the river runs into the sea, and having placed himself on a bank between the river and the sea, he began to speak to the fishes as if the Lord had sent him to preach to them, and said: "Listen to the word of God, O ye fishes of the sea and of the river, seeing that the faithless heretics refuse to do so."

No sooner had he spoken these words than suddenly so great a multitude of fish, both great and small, approached the bank on which he stood, that never before had so many been seen either in that sea or that river. All kept their heads out of the water and attentively gazed at the face of St. Anthony. All were arranged in perfect order and most peacefully, the smaller ones in front near the bank, after them came those a little bigger, and last of all, where the water was deeper, the largest...

Then, St. Anthony, seeing the great reverence of the fish towards God their Creator, rejoiced greatly in spirit, and said in loud voice: “Blessed be the eternal God, for the fishes of the sea glorify Him more than the men without faith, and the animals without reason listen to His word with greater attention than the sinful heretics.”

Prayer for the Restoration of Things Lost or Stolen

O blessed Saint Anthony! The grace of God has made thee a powerful advocate in all necessities, and the patron for the restoration of things lost or stolen. To thee I turn today with childlike love and heartfelt confidence. Oh, how many thousands hast thou miraculously aided in the recovery of lost goods! Thou wast the counselor of the erring, the comforter of the afflicted, the healer of the sick, the raiser of the dead, the deliverer of the captive, the refuge of the afflicted. To thee do I hasten, O blessed Saint Anthony! Help me in my present affliction. I recommend what I have lost to thy care, in the secure hope that thou wilt restore it to me if it be to the greater glory of God and to the spiritual benefit of my soul. Obtain also for me an active faith, peace of mind, disgust for the vain pleasures of the world, and an ardent desire for the imperishable goods of eternity. Amen.

“St. Anthony Preaches to the Fishes”, from "The Little Flowers of St. Francis of Assisi," 1476