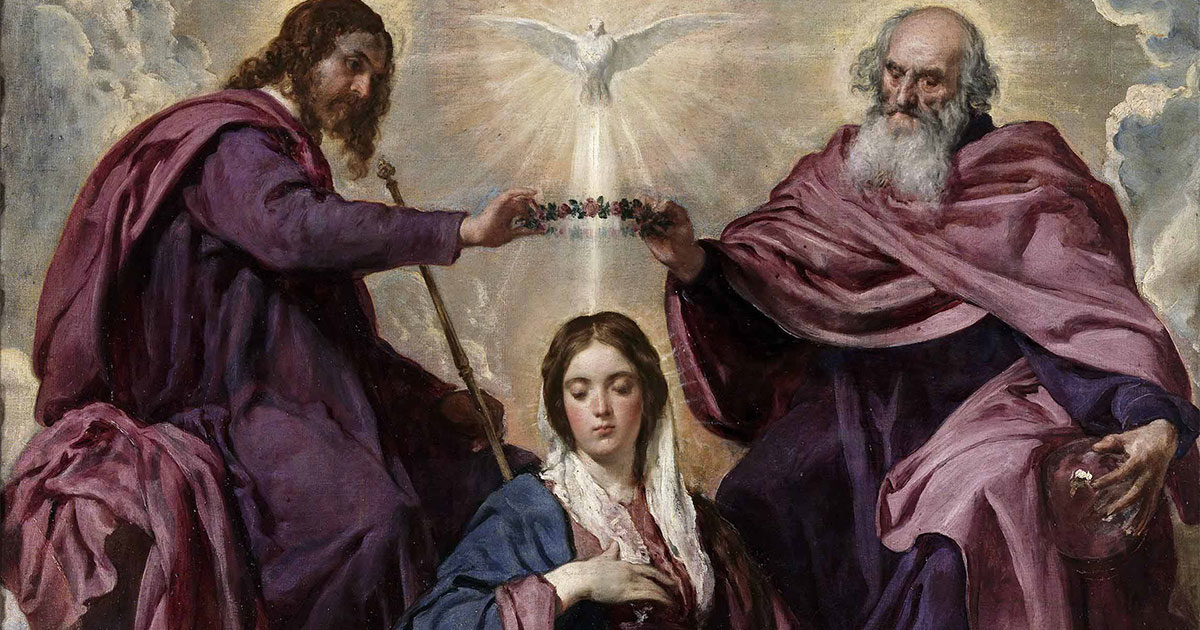 Proclaiming the Queenship of Mary

Pope Pius XII established the feast of the Queenship of Mary in 1954, and is now celebrated on the octave day of the Assumption.

Pope Pius XII established the feast of the Queenship of Mary in 1954, a logical follow-up to the Assumption, and is now celebrated on the octave day of that feast. In his 1954 encyclical 'Ad caeli Reginam' (To the Queen of Heaven), Pius XII points out that Mary deserves the title because she is Mother of God, because she is closely associated as the New Eve with Jesus’ redemptive work, because of her preeminent perfection, and because of her intercessory power.

Reflections on the Queenship of Mary

Excerpts from 'Ad Caeli Reginam', the Encyclical of Pope Pius XII on proclaiming the Queenship Of Mary, 11 October 1954

From early times Christians have believed, and not without reason, that she of whom was born the Son of the Most High received privileges of grace above all other beings created by God. He "will reign in the house of Jacob forever," "the Prince of Peace," the "King of Kings and Lord of Lords." And when Christians reflected upon the intimate connection that obtains between a mother and a son, they readily acknowledged the supreme royal dignity of the Mother of God.

According to ancient tradition and the sacred liturgy the main principle on which the royal dignity of Mary rests is without doubt her Divine Motherhood. In Holy Writ, concerning the Son whom Mary will conceive, We read this sentence: "He shall be called the Son of the most High, and the Lord God shall give unto him the throne of David his father, and he shall reign in the house of Jacob forever, and of his kingdom there will be no end," (Luke 1: 32-33) and in addition Mary is called "Mother of the Lord"; from this it is easily concluded that she is a Queen, since she bore a son who, at the very moment of His conception, because of the hypostatic union of the human nature with the Word, was also as man King and Lord of all things. So with complete justice St. John Damascene could write: "When she became Mother of the Creator, she truly became Queen of every creature." Likewise, it can be said that the heavenly voice of the Archangel Gabriel was the first to proclaim Mary's royal office.

But the Blessed Virgin Mary should be called Queen, not only because of her Divine Motherhood, but also because God has willed her to have an exceptional role in the work of our eternal salvation. "What more joyful, what sweeter thought can we have" - as Our Predecessor of happy memory, Pius XI wrote - "than that Christ is our King not only by natural right, but also by an acquired right: that which He won by the redemption? Would that all men, now forgetful of how much we cost Our Savior, might recall to mind the words, 'You were redeemed, not with gold or silver which perishes, . . . but with the precious blood of Christ, as of a Lamb spotless and undefiled.' We belong not to ourselves now, since Christ has bought us 'at a great price'."

Now, in the accomplishing of this work of redemption, the Blessed Virgin Mary was most closely associated with Christ; and so it is fitting to sing in the sacred liturgy: "Near the cross of Our Lord Jesus Christ there stood, sorrowful, the Blessed Mary, Queen of Heaven and Queen of the World." Hence, as the devout disciple of St. Anselm (Eadmer, ed.) wrote in the Middle Ages: "just as . . . God, by making all through His power, is Father and Lord of all, so the blessed Mary, by repairing all through her merits, is Mother and Queen of all; for God is the Lord of all things, because by His command He establishes each of them in its own nature, and Mary is the Queen of all things, because she restores each to its original dignity through the grace which she merited."

For "just as Christ, because He redeemed us, is our Lord and king by a special title, so the Blessed Virgin also (is our queen), on account of the unique manner in which she assisted in our redemption, by giving of her own substance, by freely offering Him for us, by her singular desire and petition for, and active interest in, our salvation."

From these considerations, the proof develops on these lines: if Mary, in taking an active part in the work of salvation, was, by God's design, associated with Jesus Christ, the source of salvation itself, in a manner comparable to that in which Eve was associated with Adam, the source of death, so that it may be stated that the work of our salvation was accomplished by a kind of "recapitulation," in which a virgin was instrumental in the salvation of the human race, just as a virgin had been closely associated with its death; if, moreover, it can likewise be stated that this glorious Lady had been chosen Mother of Christ "in order that she might become a partner in the redemption of the human race"; and if, in truth, "it was she who, free of the stain of actual and original sin, and ever most closely bound to her Son, on Golgotha offered that Son to the Eternal Father together with the complete sacrifice of her maternal rights and maternal love, like a new Eve, for all the sons of Adam, stained as they were by his lamentable fall," then it may be legitimately concluded that as Christ, the new Adam, must be called a King not merely because He is Son of God, but also because He is our Redeemer, so, analogously, the Most Blessed Virgin is queen not only because she is Mother of God, but also because, as the new Eve, she was associated with the new Adam.