Bishops of the Catholic Diocese of Dallas 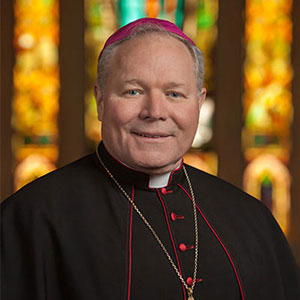 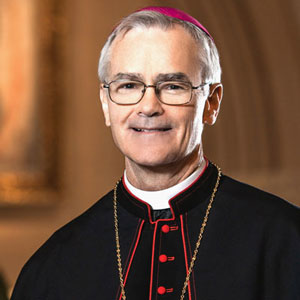 Past Bishops of the diocese 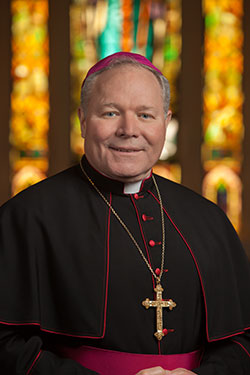 Bishop of the Diocese of Juneau

Bishop of the Diocese of Dallas

Responsibilities with the United States Conference of Catholic Bishops 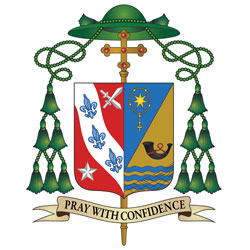 In according to the Roman Catholic Church heraldic tradition, the Coat of Arms of a Bishop is normally composed by:

Here it has been chosen a samnitic shape shield, frequently used in Roman Catholic Church heraldry and a botonny processional cross with five red stones to represent the Five Wounds of Christ.

For his motto Bishop Burns has chosen the familiar words from the liturgy that so often serve as an invitation to prayer and they reflect the words of the Apostle and Evangelist John encouraging believers to be confident that the Lord will hear us when we pray:

“And we have this confidence in him, that if we ask anything according to his will, he hears us.  And if we know that he hears us in regard to whatever we ask, we know that what we have asked him for is ours.”
1 John 5:14-15

It also reflects the passage in the Gospel of Luke, known as the gospel of prayer, where Jesus teaches his disciples to pray:

Blazonry (heraldic description) of the Coat of Arms

“Impaled. Dexter: Gules, on a fess per bend wavy Argent three fleurs-de-lis Azure; in the sinister chief two crossed swords of the second, in the dexter base a mullet of the same; sinister: per bend sinister of the third and Or, a seven points star encircled by a rosary of the same in the dexter chief and a bugle-horn Sable, stringed of the first in the sinister base; three wavy barrulets of the third in base, thereupon a fishnet of the fifth”

In the right side of the shield (in the heraldic shield, right and left are exchanged from the observer point of view since we have to consider the right and the left of the soldier who holds his own shield) we find represented the Coat of Arms of the Diocese of Dallas; it has a red (Gules) field in honor of the Sacred Heart of Jesus.

The diagonal white bend represents the Trinity River located within the diocese (the placement of the bend, from top left to bottom right, somewhat resembles the northwest-southeast direction the river takes through the state).

The fleurs-de-lis within the bend are in honor of Pope Leo XIII (who was Pope when the diocese was established) and are taken from his coat of arms. The fleur-de-lis is repeated three times to represent the Holy Trinity.

The solitary star represents Dallas and also pays tribute to Texas' nickname, "The Lone Star State". The two swords honor St. Paul, who is the patron saint of the first Catholic settlement in Northeast Texas.

In the left side there is the personal Coat of Arms of Bishop Burns: this part of the shield is divided in two colours: the blue (Azure) symbolizes the separation from the worldly values and the ascent of the soul toward God, therefore the run of the Celestial Virtues which raise themselves from the things of the earth toward the sky. On this field we can see a star enclosed in a rosary, in honour of Our Lady of the Rosary whose feast is on October 7th, day of birth of Bishop Burns, while the last part of the shield is coloured in gold (Or), the most noble metal, symbol then of the first Virtue, the Faith: indeed, is due to Faith that Bishop Burns became a “fisher of men”, a service he has till now developed as a priest, a vocation director, Rector of the Seminary of Pittsburgh and as Bishop; the net recalls opportunely the Lord’s charge to St. Peter to be a “fisher of men” and the importance of this ministry in the Diocese of Dallas.  The black (Sable) horn, in heraldic shape, comes from the coat of arms of the Burns family and the three waves of water in blue (azure) want to remind the three rivers of the Diocese of Pittsburgh, where Bishop Burns comes from.

"Argent, upon a chevron Azure two estoiles of the first; between to chief dexter a fleur-de-lis and to chief sinister a trefoil and to base a star, all of the second." 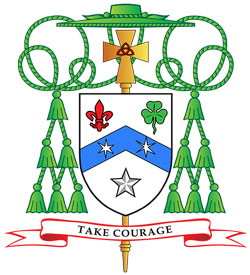 The episcopal heraldic achievement, or bishop’s coat of arms, is composed of a shield, which is the central and most important part of the design and tells to whom the design belongs, the external ornamentation, which tells the owner’s position or rank, and a motto, placed upon a scroll. By heraldic tradition the design is described (blazoned) as if being done by the bearer with the shield being worn on the arm. Thus, where it applies the terms “sinister” and “dexter” are reversed as the design is viewed from the front.

For the bishop who is without jurisdiction, as an Auxiliary Bishop, the entire shield of his design is given over to his personal arms.

Bishop Kelly’s arms are based on the Kelly family design where the shield is silver (white) and the charges (symbols) are black. For difference, and for his deep devotion to the Blessed Virgin Mary, the chevron is now blue. The chevron is reminiscent of the mountains of Colorado, so dear to His Excellency’s youth and the chevron is charged with two estoiles (special, six pointed stars) that are taken from the mantle of the image of Our Lady of Guadalupe to remind all of the profound Hispanic influence in Texas, the “Lone Star State“, represented by the single star below the chevron. Above the chevron are a fleur-de-lis and a trefoil (the heraldic representation of a shamrock) to honor the Bishop’s Irish and French-Canadian heritage.

For his motto, His Excellency, Bishop Kelly has adopted the phrase “TAKE COURAGE,” taken from the words of Jesus to the disciples as he walking towards them on the water (Mt. 14: 27): “Take courage, it is I, do not be afraid.” It is also the essence of the Archangel Gabriel‘s words to Mary at the Annunciation. In this phrase, His Excellency expresses that it is by God’s Strength that we have the courage to live as Christ has called us. Through the intercession of Mary we receive the grace to keep our eyes on the Lord and on the path he love leads us on.

The achievement is completed with the external ornaments that are a gold (yellow) processional cross, that extends above and below the shield, and for Bishop Kelly is charged with the interlocking Irish knot-like loops, in red, to honor the Most Holy Trinity, and to recall his formation for priesthood at the seminary of that name on the campus of the University of Dallas in Irving, TX; There is also a pontifical hat, called a galero, with its six tassels, in three rows, on either side of the shield, all in green. These are the heraldic insignia of a prelate of the rank of bishop by instruction of the Holy See, of March 1969.

Text and Coat of Arms by: Deacon Paul J. Sullivan